This year, we had four of us, all having been to Kentwell before, and two with well over a decade each under their belt.

I was head of station, and often referred to the others on the foundry as Master Alexander. Which was especially nice when I had just corrected something or made a useful comment about things. My many years experience has given me a good foundation of knowledge and confidence about my own capabilities and knowledge.

The great thing about having experienced people there was that all I had to do was mention a few facts and answer their questions and they immediately incorporated it into their spiel to the public. I was initially a bit stressed on Sunday because it was the first day and I didn’t quite know what I had to work with, but the three of them swung into action and by Monday were talking convincingly to school children about various things.

The week did start a bit badly, because I found on Saturday night when dropping my stuff off (After driving 430 miles, so a bit tired) that someone had adapted the furnace to look like this:

END_OF_DOCUMENT_TOKEN_TO_BE_REPLACED

I got these from ebay last year. Now, to have a closer look at them.

Firstly, lead spindle whorls are hard to date, and there is little agreement about when they are from, because in Britain at least, there aren’t any properly dated examples. Instead they are found in the countryside where they have fallen from someone’s spindle. 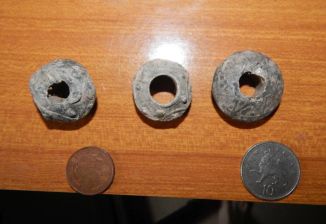 END_OF_DOCUMENT_TOKEN_TO_BE_REPLACED

Exhibit A, the phase diagram for a copper- tin alloy, usually known as bronze (Stolen from wikipedia or wherever):

Along the bottom is the weight % tin, i.e. if the object weighs 1kg, and is 50% tin, there is 500g of tin. Sure, that doesn’t seem as scientific as going by mols, but then a lot of metallurgy harks back to before it was properly integrated into modern chemistry. END_OF_DOCUMENT_TOKEN_TO_BE_REPLACED

For several years now I have been trying to make various replica pewter and lead objects, one being a spindle whorl. Not perfect copies cast from an original in silicone, but copies of the sort that a foundryman might make after seeing an object. Of course the process of making the object can also teach you something about the manufacturing capabilities of the time and confirm or disprove how you think it was made.

Spindle whorls are the weight which keep the spindle turning when you are using a drop spindle to make thread, as was common throughout the medieval period and into the 17th century. Excavated examples include ones made of wood, pottery and lead and obviously I am interested in the latter.

Of course nobody seems to have written anything about how they were made, except it is obvious that they were cast. I have examined 5 myself, and the portable finds database gives access to photographs of many others, of several main types amongst the hundreds of examples.

The PAS finds 1,737 medieval lead spindle whorls, which is probably a small fraction of those found over the years, nevertheless it indicates a huge number of them.

Unfortunately the first attempt I made 5 years ago now involved casting plaster and a spindle whorl: 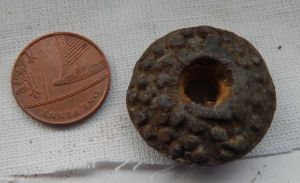 It didn’t really work, casting plaster is trickier to use than you think, especially when the whorl is of such an odd shape.

A friend lent me a smaller simpler whorl several years ago, and I’ve been carving since then.

This is it side and top view. Note how well rounded it is, which might be due to wear or the method of casting: END_OF_DOCUMENT_TOKEN_TO_BE_REPLACED

Professional therapy online and by telephone