So I want to carve some soapstone for casting bronze havettes. I have a couple of largish pieces of stone that I just need to flatten properly on one side, to make a two piece mould. The question is where to put the ingate. Should I run the bronze down a channel and fill the mould from the bottom? That way the air is forced out the top, but I’ll need to carve an extra channel for the pointy bits. Overall this way has produced good results when I’ve done it using lost wax. 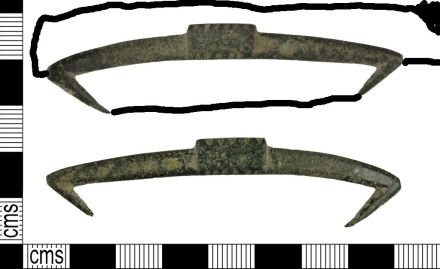 Should I put it in the side and tilt the havette slightly so that it flows up? That isn’t too bad an approach, although it does rather hasten the filling and I think increases the chances of air bubbles. 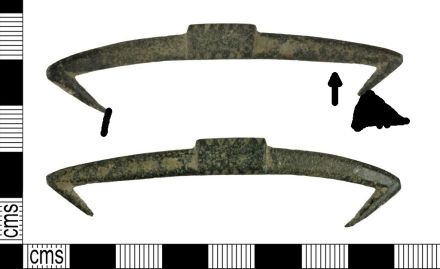 Should I just pour in the top and hope for the best? This is usually the worst way, unless the mould is open enough to be able to let air out all around, since the air coming out will have to mix with the liquid metal coming in.  It also leaves more messy sprue around the outside to clean off.

I know, lets have a look at some real ones from the portable antiquities scheme.

Unfortunately, despite them being pretty good photographs, it isn’t at all clear. If I handled one myself I could have a better idea, but at the moment it isn’t obvious. They may even have been made with lost wax method, but what makes it difficult to say is that they will have been finished off with the sprue cut off and the area sanded down.

This one for instance, in order to make it work properly the hooky bits need to be filled. But it is pretty smooth all over, with perhaps a small bubble at the bottom where the hook joins the main body. The decoration is probably made using a file.

I like this one, it’s a bit pitted but clearly shows how pointy the spikes are.

I suspect that they were made with much larger spikes to be ground down into proper spikes. Which means that if the bronze came into the mould that way, there would be less evidence for it since it was ground away.

In the end all I can do is try a method and see how it turns out.  I am minded to go for the first and second ones, the stone is big enough to do that.

My next thing is working out how to hold the two halves of the mould together when the bronze is being poured into it.

Professional therapy in the heart of Brighton