I have had the ambition for years now to make good pewter buckles, of the sort in use in the 14-15th centuries for holding shoes shut. Numerous examples can be found in the Museum of London book “Dress accessories” and other books of finds.

The mould I am using is is made of soapstone, which I am using purely because I don’t have access to easily carved limestone or siltstone.

Note that I’m cramming quite a few items into one mould, which was done in the past. Good stone isn’t so cheap and easy to find, and it makes sense to use it for several objects, or use two sides for different objects, as seen in some of the Coventry moulds.

The slight problem is, how do I make sure that both sides have the correct half on them? Dan Towse (http://pbsn3.pbworks.com/w/browse/#view=ViewAllObjects), an experienced SCA caster, reckons they squared the mould sides off and measured. That would work well enough I think; being a cheapskate I don’t always use squared off moulds in order to maximise the amount of stone I can use, yet most moulds I have seen are squared off which certainly strengthens his hypothesis.

So, given the situation I was in, how should I mark either side? I tried using damp red clay in the already carved side, but it did not stick very well and rather marked one side of the stone as you can see at the bottom left:

Then I tried pouring wax in, hoping it would stick to the appropriate area. It did, but also spread a little beyond, so it was not as accurate as I would have liked. Still, it was a start.

Next I tried casting metal into it, hoping the white stone would be marked by it. No luck, the white soapstone remained unmarked.

When test casting into the mould though, I found that a partly complete cast could indicate the other side of the mould easily enough: 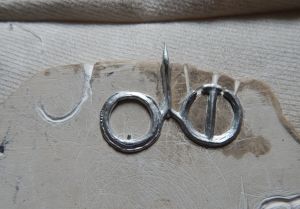 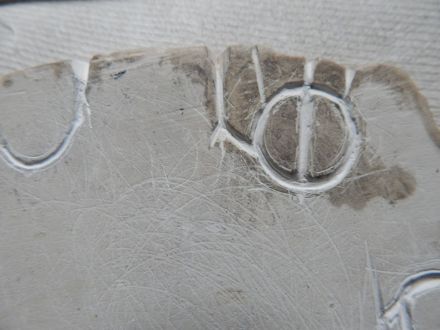 So perhaps they did it that way? It would be nice to find some objects that are clearly half made, and that show both sides of the mould. Once you have carved the edge of the area to be carved out, you can carry on carving with the occasional test casting in order to see how you are doing:

I would expect real half-done moulds to show some evidence of this or another way of carving, although if the carver is sufficiently good and artistic they could do it virtually freehand I am sure.

Professional therapy in the heart of Brighton